Well, I'm home from RWA13 in Atlanta and finally feel like I have my feet beneath me. It always takes a few days to recover from conference and Monday and yesterday I was so scattered!

I was supposed to be home on Sunday night. I left for the airport on Sunday in lots of time, taking the shuttle with Maisey Yates and Jackie Ashenden. We knew some weather was due to blow in later and we all hoped that we got out before it hit. I went through security, no problem. Everything was seamless. In the few minutes before boarding, the gate agent asked if anyone was interested in upgrading to first class for $100 as the plane was full. I toyed with the idea, texted my husband.

I'd gotten my airfare at a great rate to begin with, so on a whim I splurged and yes, I upgraded. My very first ever time flying first class! Go me!

We boarded the plane. I was seated next to a young man who was probably 20, 21, and very nice and slept a lot. There is a crap-load of leg room in first class, y'all. I mean I could stretch right out, or cross my legs and not even come close to touching the seat in front of me. I'd barely sat down when the flight attendant asked if I wanted a beverage. Cool, I thought. I could get used to this.

And then things started to go hinky.

Something happened on pushback - my hunch is the tug seized up. There was a big shudder and skid and women gasping with distress in the back. At first we thought we hit something. But then the pilot said it was the tug and they were swapping it out so that makes me believe something happened there. Of course the mechanics had to inspect the nose gear first, and then do the proper paperwork and by the time we were all ready to go, the weather rolled in with flashes, booms and lots of rain.

We sat at the gate, in our seats, for THREE HOURS.

One man in first class was very vocal about the "incident" and it was clear he was drunk and he was escorted discreetly from the plane. First time I'd seen that.

A little girl who was adorable finally needed to burn off some energy so she and her turquoise sequinned shoes (Blythe Gifford would have loved them!) and pigtails went up and down the aisle making people smile. Incidentally, when we did finally take off, I never heard a peep from her. She was awesome.

Flight attendants went by with water for everyone and snacks for first class. Go me.

About 10 people got off to rebook from Atlanta. I knew after hour #2 that I was going to miss my connection to Halifax. And it was the last one of the night.

We finally took off and I was also happy for the complimentary wine and pretzels as they ended up being my dinner.

When I arrived in Philadelphia, my boarding pass for the next morning was waiting, as well as a hotel voucher. The shuttle was great but the hotel was a bit scary and ick. No a/c had been turned on so I flashed that up to get rid of the musty smell and heat and then seriously did NOT put anything on the floor.

The good news? The next morning I realized they'd bumped me to first class the whole way through! I slept a good part of the flight from Philly to Halifax, with my legs stretched out and a blanket over my shoulders. When I woke and rang the flight attendant for a glass of water, she smiled and said "Good morning".

On short hops first class isn't champagne and heated napkins and meals, but let me tell you, I was so glad I was in those seats instead of back in cattle class.

Now I'm back, getting into the swing of the story, and enjoying sleeping in my own bed.

In which I do something very uncharacteristic.

I'm a planner. I book things well in advance, have a plan, have my ducks in a row. I've said for MONTHS that I am not going to RWA in Atlanta this year. And guess what?

Which means I basically have today and this weekend to: make big word count on the WIP, let my editors/agent/peeps know I'm going, make my husband a calendar of kid commitments next week and times, clean the house, do all the laundry, pack, and make my own conference schedule calendar. Oh yeah - and lose five pounds. LOL

Here's the good news. I've started my own calendar, which is lighter than in other years since I'm not doing any signings (that's what I get for signing up so late). I tried on my wardrobe and while I don't have time to shop for anything new, my conference clothes from the last 2 years STILL FIT. Thank GOD.

I booked my flight at a startlingly low price and found a roommate. :) Holy crap. This is absolutely crazy and I can't believe I'm doing it but I am.

So now I'm dashing off - to write, to work out, to find my passport. That might be a good thing to have along. 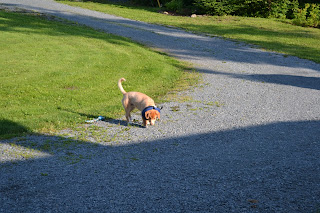 The weekend was scorching hot. We alternated time between trying NOT to roast inside and cooling off in the pool outside and lots of frosty drinks. I particularly felt sorry for our dog, who ended up with a hot spot on one of her front legs and has had to wear an inflatable collar to keep her from licking it as I put medication on it. We tried wrapping it, but she managed to get her teeth on the bandage and pulled it down so that she could get at the spot. So on went the collar. To compensate, we actually let her get in the pool for a few minutes each day to cool off. This is the first year we've done it, but with temps that were around 39-40 degrees, well, I took pity on her.

So now we're at Monday. I usually love Mondays. But this morning I was awakened earlier than the alarm, which made me grumpy. Then we got up and discovered ANTS in my kitchen. Thankfully not in the food but they had managed to get on my counter which made me totally freak out. I instantly started cleaning with vinegar water and got out the vacuum and did all the breakfast dishes up immediately so there was no food around while the husband did the exterminator thing. BLECH!

Then he had an unfortunate incident with our compost bin. Then he dropped something when he came inside and by the time he made a coffee he was wondering if he should just go to bed.

It started out as ONE OF THOSE DAYS.

But things are looking up. It's a bit cooler, with a soft, light rain falling, the house is empty of kids, and I'm about to dig into my WIP while he putters around.

And a fun thing for me is that I'm over at The Chocolate Box today talking about my five favourite hooks in stories - both reading and writing. :) Come on over and let me know your fave hooks! The week started out with celebrations here in Canada - it was our 146th birthday and we celebrated with barbecued chicken, potato salad, and apple pie, and of course, FIREWORKS! The husband did a great job this year, and they were awesome enough that the neighbours down the way watched from their deck and we could hear their little girl oohing and aaahing!

July 1st was also, incidentally, the release of my 4th Cadence Creek Cowboy book, A COWBOY TO COME HOME TO. :) Double the reason to celebrate!

My kids are involved in a community leadership program this year, so they spent Canada Day afternoon volunteering at the local rec center, dishing out sno cones, scooping up popcorn and helping little ones blow bubbles and draw chalk pictures. But of course Canada isn't the only one celebrating a birthday this week. Happy Independence Day to my readers and friends in the US! I hope you had a great day of festivities, food, and family get togethers.

I'd love to know how you celebrated either holiday - let me know in the comments section!
Posted by Donna Alward at 7:23 p.m. No comments:

Email ThisBlogThis!Share to TwitterShare to FacebookShare to Pinterest
Labels: Canada Day, Fourth of July, This and that
Newer Posts Older Posts Home
Subscribe to: Posts (Atom)