I'm off for the holidays and recharging in preparation of coming back with a vengeance in January. In the meantime, I leave you with this, and I'll see you all in the New Year. Merry Christmas!

What's Under The Christmas Tree?

Right now there's a fun contest going on at the Harlequin Romance Author blog. We've posted pics of our various Christmas trees and on the 26th we'll be posting a winner to take home the grand prize! You can enter once each day, so why not pop on over! You can find us at www.harlequinromanceauthors.com .

Tonight I'm making my favourite stuffed mushrooms for a get-together we're hosting (as well as making a bunch of other stuff). Here's the recipe for the mushrooms, as they are delicious and super easy and best of all you do most of it ahead of time. Apologies for not having exact amounts, but you'll be able to make these in whatever quantity you like. I always have leftover sausage that I save for something else, like pasta sauce or spicy omelets.

Remove the stems from the mushrooms, wipe them clean, and put them in a container. Marinate them in the dressing for at least one hour.

Put foil on a cookie sheet. Place the mushroom caps on the sheet (discard dressing). Put a little sausage in each one, top with a little parmesan. Bake at 400 degrees for 10 minutes or until bubbly.

Last night the dh and I watched the latest episode of Homeland. For those of you without super channels etc...let me give you a brief rundown. Homeland is about a soldier who was MIA for 8 years, a prisoner of a terrorist called Abu Nazir. He's rescued and brought home to a hero's welcome...but there are questions. It's not all black and white with this guy.

As the credits rolled after the epi, my husband commented on the strength of the writing. This is big because he NEVER does that. He might say it was a good episode, or how great an actor was, or wonder aloud what might happen next. He even likes The Newsroom which I think is BRILLIANTLY written and has not made that comment. But after last night...yeah. He said the writers really know what they're doing.

I LOVE how Brody is both hero and anti-hero. I just watched a clip from the season finale (a couple of weeks away) where Saul (Carrie's mentor) calls her the smartest and dumbest f* person he's ever met. These are messed up people. And the plot just keeps twisting and turning and twisting...Honestly, I know season 1 took home a boat load of Emmys but season 2 is way better than 1 ever was.

This most recent epi was one of a lot of turning points. I don't want to spoil it, but you KNOW it's going to be one of those...okay, let's give these people a really nice, normal moment before we blow things all to hell. Claire Danes as Carrie is beautifully damaged and she does an awesome job playing the part. And Damian Lewis...well hell, I've loved him since he walked on the screen as Dick Winters. He's madly talented - one moment smart, another sexy, and then he'll do this emotions on the knife edge kind of thing that's sort of uncomfortable.

Not to mention Mandy Patinkin and I find I'm really warming up to Rupert Friend.

I was talking to someone the other day about  how The West Wing isn't quite as edgy as The Newsroom and that I think it's part of the "cable" thing happening. Shows like Homeland, The Newsroom, Sons of Anarchy, Breaking Bad... they're too edgy for network tv. There's more latitude with cable, and that's where the cutting edge shows are showing up. It's well worth the extra $16 a month to get those stations and On Demand. Because while I still watch a few regular network shows, I'm finding the strongest writing, the most intriguing characterization and thought provoking stories are happening on cable.

Any of you watch Homeland? Are you loving it as much as I am?
Posted by Donna Alward at 12:47 p.m. 2 comments:

Email ThisBlogThis!Share to TwitterShare to FacebookShare to Pinterest
Labels: homeland, the newsroom, TV

For your weekend viewing pleasure, I got my latest cover yesterday! Isn't it GORGEOUS? This book will be out in March. They did a really good job on it! 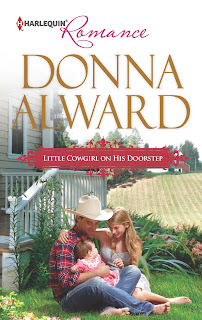 Email ThisBlogThis!Share to TwitterShare to FacebookShare to Pinterest
Labels: Cover Squee, Little Cowgirl on His Doorstep

Believing in a Story

The past few weeks I've been working on revising THE HOUSE ON HIDEAWAY HILL. This is the big, single title-length story that was passed on a few weeks ago. There were a few snippets of feedback in the letter to my agent that I paid attention to. So I've been making some changes before we start sending it out again.

Here's a funny thing about rejection. It's a bit of a balancing act, a pro and con list that you have to weigh and decide your next step. On one hand, if the book has been rejected, it's entirely possible that it was rejected because it was substandard and not ready for publication. You have to decide if you believe in the story enough to try again, somewhere else. You have to remind yourself that you need to look at it objectively. That is a very hard thing to do. Because despite the many messages you get from a rejection letter, the one that shouts the loudest is the one that says It's Not Good Enough.

As writers we're genetically programmed to listen to those voices, I think. The Crows of Doubt come cawing the moment they smell disappointment in the air.

But here's something I realized about believing in a story: it's not about thinking that your story is fine. It's about realizing that it might not be perfect but you believe in it enough to work at fixing it, make it better.

I feel that way about Hideaway Hill. Even as I was revising the front end, and trying to ignore the whispers of doubt in my ear, I knew that I believed in this book and that I'm not ready for the journey to be over. Then I hit the last 100 pages and I KNEW it was the right thing. I found myself blinking away tears several times. And when I read the words THE END, I gave a big, happy sigh - totally spontaneously. I believe in this book. I believe in this story and the series and I believe I can do this.

There have been books I've put aside after rejection. There are ones in my R file that I've looked at, wondering if they were worth revising now that I'm further along in my development as a writer. They're not. I don't believe in those stories. I would be far better off writing something new.

But this one? Yeah. I'm still excited about it.

So...it might take a while, and I don't know where the road will lead, but the story isn't over for this one yet. And you can bet I'll keep you posted.

I had a fantastic weekend. I turned down a few invitations, which was disappointing but I felt necessary. I’ve been fairly stressed and got the feeling that I really needed to a) have a weekend without doing a lot of running and b) have a weekend where I got a lot done. Both of the invitations were to things that would have been fun – drinks at a friend’s house on Friday and then a day trip with another friend and her daughter on Saturday, so I kind of miss having done those things. But the end result tells me I made the right choice because the weekend was great.


On Friday my youngest didn’t have school, so we took a list, ran Christmas shopping errands and then treated ourselves to lunch at Moxie’s, which was delicious. On Friday night the girls and I snuggled up on the couch and watched one of my fave chick flicks and one that is somewhat Christmassy – The Holiday. It’s hard to be glum when Jack Black is singing Scroodleydoo.


Saturday I got up and made the family breakfast. Unfortunately that meant trying a new recipe for a shredded hashbrown thing that was, honestly, disgusting. Thankfully the youngest had scrambled some eggs and I made maple sausage patties. They were a new try for us, by a local biz and when they said lean they weren’t kidding. Not a drop of fat ended up in the pan, and they were delicious. So the meal wasn’t a total fail. Just the potatoes. Then the husband and I ran errands while the girls started cleaning. I got a price match on a recent purchase which was awesome, and then we picked up some K-Cups – I tried the Green Mountain Coffee Spicy Eggnog and it is GORGEOUS! Bought more. When we got home we had some lunch, finished cleaning the upstairs, and then spent the afternoon decorating the house and cleaning the downstairs as we went.


After supper the eldest had badminton practice, so youngest and I curled up and watched The Santa Clause.


Sunday was baking day. We made Chinese Chews, Chocolate Peanut Clusters, Gumdrop Cake, Chocolate Truffles (new recipe, TO DIE FOR), and 2 kinds of Chex Mix as well as a ham dinner for supper. There are a few more things to make, but we got a huge start on it. Some decorated shortbread, Chocolate Peanut Butter Balls and War Cake is all that’s required. And we watched White Christmas.


To top it off, my stress kind of melted away. Do you know I haven’t even been able to READ for about three weeks? My usual escape and…it just wasn’t working. But this weekend I finished one book and started another. It felt GOOOD.


Now I’m working this week on getting revisions done on Hideaway Hill so I can send it back to my agent. And doing laundry. And the second volleyball season is kicking off. But Christmas? Heck,  I got this. J
Posted by Donna Alward at 8:11 a.m. No comments:

Email ThisBlogThis!Share to TwitterShare to FacebookShare to Pinterest
Labels: Christmas, This and that

Check out this latest from Petticoats and Pistols Filly Tanya Hanson!


Determined to get her life back on track,  Mary Grace Gibson takes on a substitute-teaching  job, grateful for the room and board offered at Hearts Crossing Ranch. The bustling family life helps her heal after abandonment by her ex. But her little boy’s serious disabilities make her cautious about revealing her secrets to anybody. Even Scott Martin, the handsome cowboy who’s fast stealing her heart.


Her former student now grown up, cowboy and graphic artist Scott Martin is instantly drawn to the beautiful single mom. She’s had some hard luck but never let go of her faith. Their age gap doesn’t fret him, and their kisses ignite his love. But as they fall for each other, Mary Grace’s lack of trust in him shatters his feelings, for he’s been down that broken trail before.


How can he assure her he’s different from the man who hurt her and neglected her son?