I'm doing a fairly good impression of the little engine that could these days.

It's a good thing my CP is such a good influence...I've followed her example and buckled down the last few days, with fairly good results. Chapter 8 got revised, chapter nine got finished and "fixed" and I'm eight pages into chapter 10. Not bad work for three days. So the ms is chugging along nicely, we've got a long weekend coming up, and I've got everything on a disk so I can work on the laptop this weekend while my dh plays on the pc.

Of course, tomorrow we have birthday celebrations for our youngest. And we're heading out for dinner Saturday - the dinner that dh owes me for getting the request in the first place.
Posted by Donna Alward at 3:26 p.m. No comments:

I'm not sure whether to sigh with relief, jump for joy, or panic.

I just received a full request from M&B Tender - 6 weeks from the date of mailing.

Hard to be sad about that, though. And now the husband owes me dinner.

I'm stealing the title of Julie C's blog a week or so ago.

I just returned from vacation. I took along a notebook and my Donald Maass book and a backlist Harlequin Romance as "work". I got half way through the HR but never cracked the cover of my others. I was having too much fun relaxing. And I did a fabulous job of it!

We went to Salmon Arm, British Columbia and camped on the Shuswap Lake. It was so beautiful! The campground was packed but beyond the trains that ran directly behind us (I mean less than 200 yards!) it was so quiet. After the first night we never even noticed the trains! We pitched our tent and spent the majority of our time on the beach. I thought of Julie as there were lots of weeds this year after the pile of rain they've had. The kids loved swimming though and my husband and I had a blast rolling each other off of our air mattresses as we floated in the sun. If this works right, I'm putting in a picture of the view from my chair on the beach when we went for our evening swim on Wednesday. 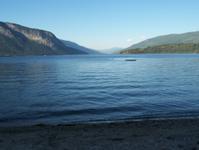 We played minigolf and took out a canoe, and spent a morning visiting a family-run cheese maker (to-die-for gouda) and then on to a local vineyard. The scenery was spectacular. They opened up just for us and I tasted probably a half dozen wines before choosing three. 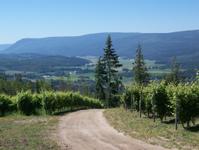 So now I'm back, trying to catch up on e-mails, banking, and laundry - and oh yeah, that pesky chapter. But I don't regret taking a whole week to think about nothing but sunscreen, premium ice cream and what to barbeque for supper.
Posted by Donna Alward at 11:18 a.m. 5 comments:

Got a critique back and man, she offers very valid questions...just ones I didn't want to hear! LOL Now I'm torn...YES, I've been nice to my characters! And I know I'm supposed to make them suffer....but I did it because I'm totally setting them up for disaster in the next. Now I am not sure which road to take...so I've been avoiding the WIP like the plague.

Any and all comments welcome. I didn't just set up this blog for MY thoughts - I love it when discussions spark up! Have you had a similar problem? What did YOU do?
Posted by Donna Alward at 10:02 a.m. 5 comments:

So This Is Me - Gone Global

Being the techno idiot I am, I wanted to put this on my main page....but just getting it into a post was hard enough.

After all the grief I went through, it turned out being so stupidly simple I blushed with embarrassment.

Now for the "gone global" part of the post: had a very interesting "conversation" today with a woman I've never met. A multipublished author, she offered me FANTASTIC advice on a few topics....free of charge, of course!

I don't think I've mentioned that I've never met my critique partner in person either - yet she's probably the most important person in my writing sphere. In fact, my whole writing world is based in this 8' x 8' square I loosely call my "office" (technically it's a dining room, but it has a desk, credenza, filing cabinet, kid's table and chairs and a piano in it, LOL).

What's really amazing is the willingness, even enthusiasm, of the writing community to embrace and assist other writers with the journey to publication (and beyond). Quite often as writers we're isolated...I mean really, how many of us can go to a company party and talk about what we REALLY do without either raising eyebrows or putting people to sleep? No one understands writing and submitting and WAITING (yep, back to that again) like other writers. I have "friends" from just about every corner of the world, but can only put faces to a handful. That's the power of the www. That's the power of technology.

I can't imagine doing this without it. Even if I am a little slow figuring things out. :-)
Posted by Donna Alward at 2:35 p.m. 7 comments:

It's all relative, according to Einstein

"The special theory of relativity was based on two main postulates: first, that the speed of light is constant for all observers; and second, that observers moving at constant speeds should be subject to the same physical laws. Following this logic, Einstein theorized that time must change according to the speed of a moving object relative to the frame of reference of an observer. Scientists have tested this theory through experimentation - proving, for example, that an atomic clock ticks more slowly when traveling at a high speed than it does when it is not moving. The essence of Einstein's paper was that both space and time are relative (rather than absolute), which was said to hold true in a special case, the absence of a gravitational field."

OK, so I sucked at physics. In fact, I never even took it in high school. I took a year of biology, a year of chemistry and fulfilled my science requirements. Physics was too much like math.

But time IS relative. Especially when you're waiting on submissions that take MONTHS.

Look at this: time must change according to the speed of a moving object (my manuscript in an editor's pile) relative to the frame of reference of an observer (me).

Why is it when faced with an unpalatable task like weekly cleaning day, time flies. But when you're waiting for something REALLY important like "yes Ms. Alward we'd love to buy your manuscript and do you have any more" or "no Ms. Alward we're passing this time but please put this behind you and work on something new", time drags. Interminably.

By now you've probably gathered that there's more to this story than general whinging, so I'll elaborate.

I sent a partial to Avalon last August. Within 12 days, it traveled from Alberta to NYC, was read, requested, and I had the hot little letter in my hands.

With all due haste I polished the full, encased it in tyvek and sent it off September 9.

This spring I e-mailed - twice - to check on it. Waiting I was fine with. It being lost was another story, and I simply wanted to know one way or another. Or so I thought.

Then, I heard the dreaded word.

Soon. Of course. It's near the top of the queue, Ms. Alward, and should be read quickly. You'll hear from us very soon.

That was over a month ago.

When my daughter wants cereal for breakfast, "soon" means probably within the next fifteen minutes. After all, her morning is really only 4 hours long from rising until noon. But when your manuscript has been sitting on an editor's desk for 10 months, "soon" doesn't really have a timeline. It could be two days or it could be 2 months. Or more. In publishing all bets are off and "soon", I've discovered, is really quite an ambiguous word.

Well, I'm doing it. I'm finally setting up my own blog. Bear with me as I work out the kinks, will you?

I'm relatively new to this whole thing, but I've been thinking about it for a long time. It occurs to me that as writers we all have different perspectives and processes, and I'm taking the leap to documenting mine here.